A “decentralized VPN” (dVPN), like a more traditional “centralized VPN” (cVPN), hides your IP address, encrypts your data, changes your digital geolocation, and allows you to be safer when browsing the internet. But dVPN goes many steps further and sends your traffic through nodes run by the community, instead of proprietary or rented servers belonging to a company. This is accomplished with the same blockchain technology that secures cryptocurrency transactions.

Centralized VPNs are helpful, but can be blocked and monitored. Logs of user data are kept by some companies (albeit usually by free VPNs, the use of which are widely discouraged), and the ones which claim not to keep logs cannot prove they are not doing so. That is not to suggest all cVPNs are spying on you, or that them only being capable of giving you their word that they aren’t is inherently nefarious. This issue exists because they can’t provide evidence of something not existing—more of an unfortunate dilemma presented by the limits of their infrastructure than them doing anything wrong.

Nevertheless, in recent times, the establishment cVPN industry has had many issues with hacks and data breaches. Not even so-called “no-log services” have been vulnerable to them. On top of this, the only action that a government or regime needs to take to stop a cVPN user from accessing blocked content is to blacklist a service's IP addresses—which are often public. Most cVPNs in countries like China either do not function, or are fixed in a constant game of cat and mouse with the authorities, which leaves users frustrated and vulnerable. Sentinel's stated goal is not so much to supplant the cVPN industry, but to provide a trustless framework that allows all VPN technology to leave behind its current vulnerabilities and advance to a new level of security and privacy.

dVPN nodes are in a distributed network spread across the planet, and no centralized provider can intercept traffic. The use of the peer-to-peer model minimizes central dependencies and removes points of potential failure or interference that disadvantage centralized networks. dVPNs are far more resilient to censorship, cyberattack, and snooping. In essence, dVPNs are a skeleton key for universal access to the internet.

Portions of the Sentinel website are outdated (a total overhaul is in progress), and the ecosystem itself can seem complex and overwhelming at a glance due to its inherent decentralization. Late 2022 has been the most substantial and consequential period of growth for the network since it was first established in 2018, but information about it has become fragmented and scattered in the process. Sentinel is already listed in our Best VPN list on PrivacyTools.io with most relevant links. This article is intended to clarify things somewhat for the new wave of community members and users.

Sentinel is not one dVPN, but rather the network of nodes and blockchain on which third-party development teams (known as "whitelabel developers," or more commonly as just "whitelabels") create their own applications. Anyone can build their own applications on the Sentinel ecosystem; a dynamic which decentralizes the very concept of dVPN itself. The project code is open source, and can be viewed on GitHub; or forked by anybody who wants to build upon it.

It should be noted that other dVPN solutions exist outside of Sentinel, including the Mysterium Network and Orchid. Much of the information and guidance offered here is applicable to their products as well.

In the past, Sentinel offered its own native dVPN applications, which included a desktop release and an Android app. Those have since been retired, as the network deployed monetization and shifted to the whitelabel system in March 2021. If you see references to these applications elsewhere online, don't be confused; the whitelabels are now the front-end for the project. The strategy was to adopt a Linux-like structure—there is no actual “Linux OS” that can be used, only “distros” built upon it, like Ubuntu or Gentoo.

This remains the strategy for Sentinel going forward; but in reaction to community feedback, the Sentinel team has also announced plans to relaunch their native Android app with new features in the future, likely to reduce the potential for misunderstandings. Regardless of future native app releases by Sentinel, the whitelabels are still the primary focus, both now and in the future.

A running total of three exist as of September 2022: 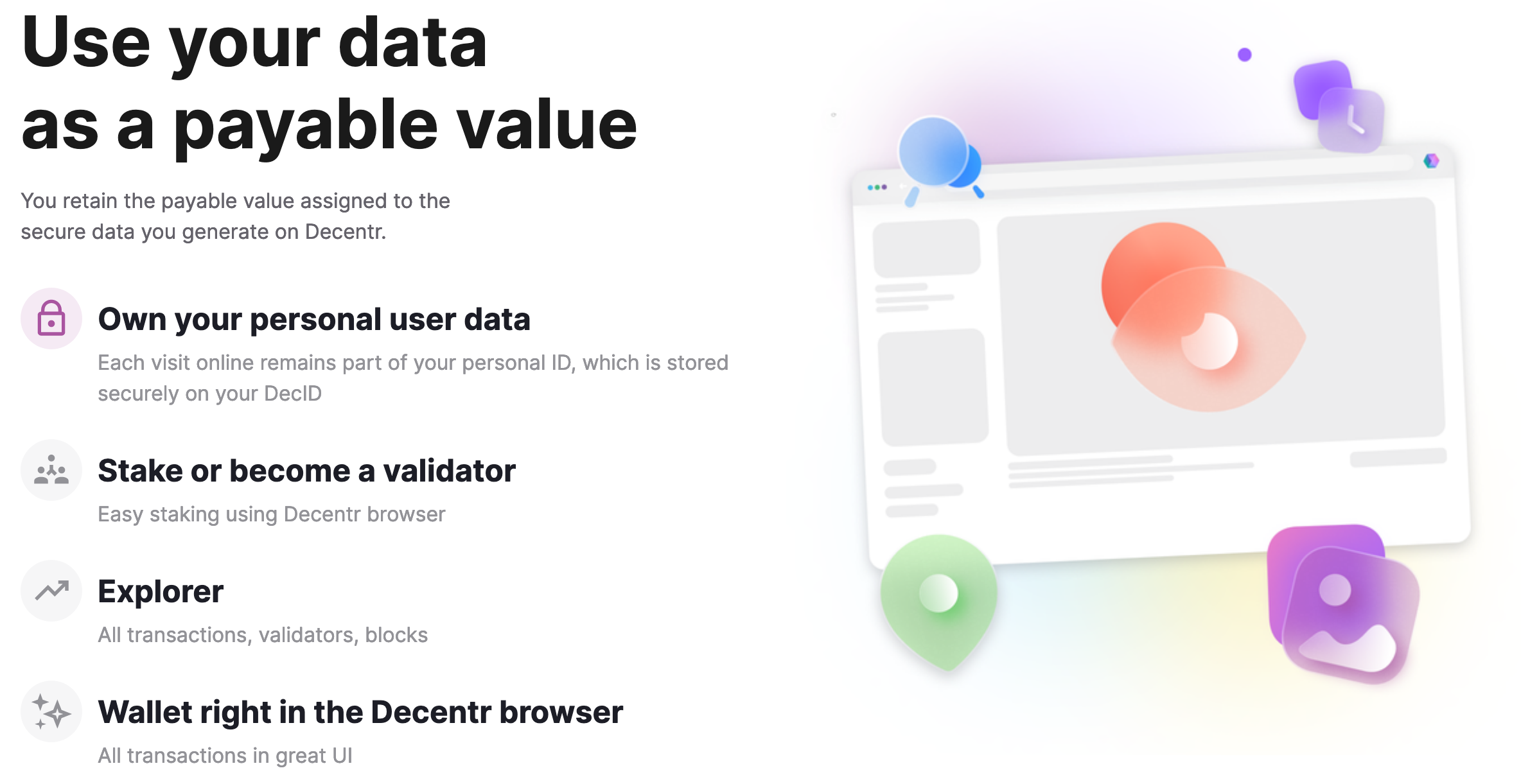 Some references to the independent Exidio and Velocity whitelabels remain scattered around the web, but those brands and their applications are defunct.

In the whitelabel applications, users can pay node runners for access to their nodes with the Sentinel token (DVPN), the network's native cryptocurrency. Under this model, users pay by the gigabyte for bandwidth, which is a much cheaper and more streamlined approach than the annual or monthly installment subscription fees of most cVPNs.

The old Sentinel testnet was free, but with the transition to mainnet in March 2021 the network was monetized to incentivize node operation; a necessary and premeditated step to ensure future growth and sustainability. Even though the days of free bandwidth on Sentinel are over, it is still extremely cheap—as of September 2022, just one US cent of DVPN tokens can purchase you over a gigabyte of bandwidth. Needless to say, this is much less than the rates for subscription packages offered by cVPN companies. On the Decentr browser, users can pay with the native DEC token, which the browser automatically awards users every month for browsing.

If you want access a Sentinel-based dVPN, but you're not acclimated to using cryptocurrency, SOLAR dVPN and Meile dVPN have secure fiat gateways for purchasing Sentinel tokens with a credit or debit card. SOLAR dVPN also has an optional account system. Users who are more experienced with buying and using crypto can just connect their wallets to the apps without an account and pay with DVPN tokens purchased from an exchange. The DVPN token is listed on several such exchanges, including KuCoin, MEXC, Osmosis, and Polarity. While optional, the latter option does provide an extra degree of privacy.

Once in the apps, things will be straightforward and recognizable to any user of a traditional VPN. Select a node with browsing speeds and a price that are optimal for your needs, subscribe, and browse.

Sentinel operates on a Cosmos Tendermint-based hub, which means that it is a proof-of-stake (PoS) blockchain. If you aren’t a cryptocurrency enthusiast, you may still recognize that term from pieces about the recent Ethereum merge.  The finer details of proof-of-stake aren't essential for knowing how to use a dVPN, so this article will not venture too far into that territory, but the actual process of staking itself is both easy and useful. Please keep in mind that staking is completely optional and not requirement to use Sentinel applications.

Staking (also known as delegating) some of your tokens with validators provides security to the network, and the staker with revenue. The Sentinel chain offers around 50% APR (annual percentage rate—or yearly return) for staked tokens—meaning you will have new tokens awarded to you in a slow, continuous stream that can be collected from at any time. Staking a modest sum of DVPN tokens and incrementally collecting the rewards can pay for your in-app bandwidth in its entirety. It also allows token holders to participate in network governance, which a prospective power user or node operator might want to have a say in.

To stake DVPN tokens, you can use:

Withdraw your tokens into your wallet of choice, and then access the staking interface to choose a validator to delegate to.

It is recommended to practice some due diligence when selecting a validator. Users are free to delegate to whomever they please, but it is better for the security of the network for the validator set to have a more even distribution of tokens among the validator set. Some delegators prefer validators that are accessible (can be communicated with) and have a track record of participation and contribution to the community.

Staked tokens cannot be used to purchase bandwidth, so remember to leave part of your balance unstaked, both to continue using dVPN applications and for paying the small transaction fees (less than 1 DVPN each time) when collecting your rewards. Also be mindful that there is a 28 day unbonding period after unstaking where you will not be able to access your tokens.

To reiterate, staking is an optional component of using Sentinel or any other dVPN, but can be lucrative and deepen your personal connections to and interactions with the products you're using.

A more in-depth guide on the Sentinel staking process written by one of the validators can be found here.

Technically, advanced users of Sentinel applications can also contribute to the network by hosting their own node. One of the project's long-term goals is to simplify the process of creating and hosting nodes; but at present some general technical expertise and rudimentary knowledge of Linux is recommended. Detailed instructions on setting up a node can be found here. The process of setting up a node can either be completed manually, or with a third-party application called HandyHost.

The hardware requirements for running a node aren't much. Sentinel recommends (at minimum) one or two CPU cores, 2 GB of RAM, 10 GB of free storage, and an internet connection with unmetered bandwidth.

Live stats on the Sentinel network's usage are available here:

Running a node carries with it some costs (mostly electricity), but node runners can earn money by charging for traffic. Sentinel also runs an incentive program for node runners, which pays out monthly. As the volume of traffic in the network increases with adoption in the coming years, running a node should become a useful source of passive income.

Sentinel and its whitelabel builders have many future releases and upgrades planned and/or under active development. This includes, but is not at all limited to:

A very kind and well-informed pseudonymous writer, Conundrum, agreed to write this helpful article to get more clarity for users that are new to the Sentinel dVPN topic. You can follow him and his updates in these places:

Stay tuned. Sentinel is not only new, but also exciting.