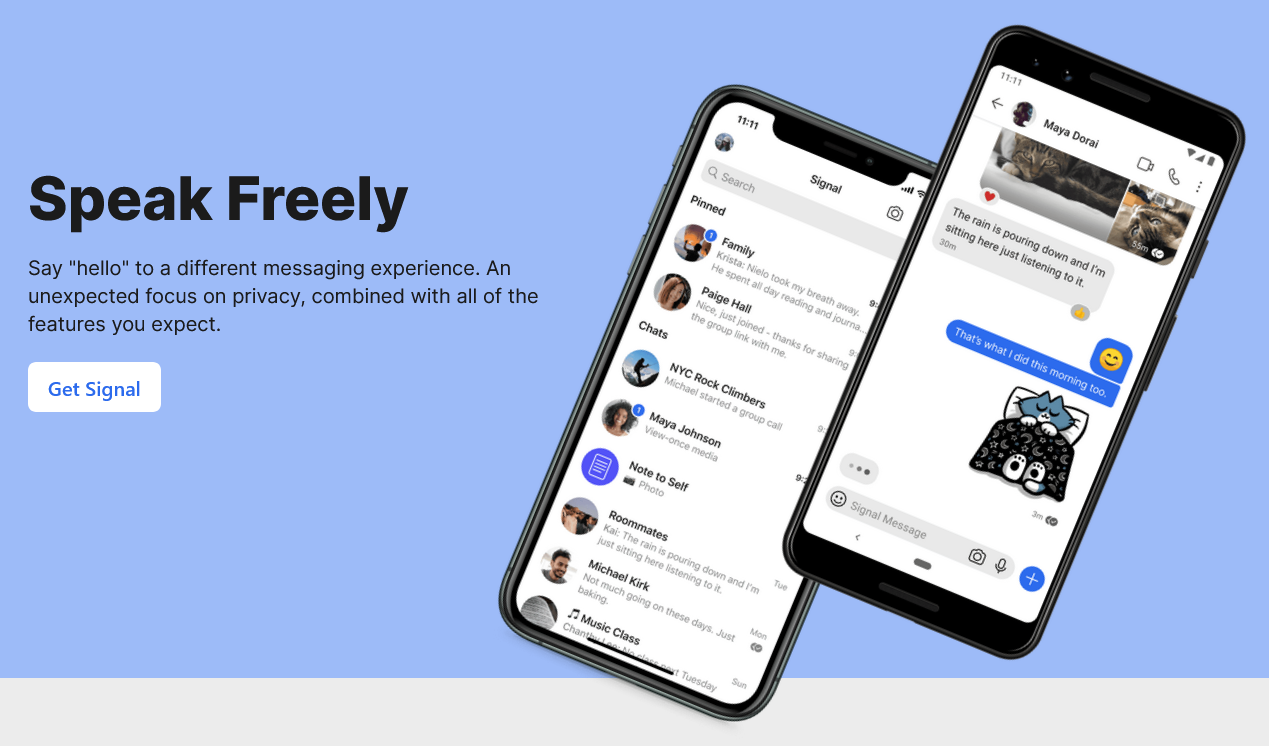 Signal is marketed on the Open Whisper Systems website as “Privacy that fits in your pocket”. Open Whisper Systems had originally created separate apps for encrypted calling and encrypted messaging called TextSecure and RedPhone back in 2010 but they have since combined the two services into one app called Signal. They are the encrypted texting and calling application used by many and advocated for by big name people in the security/privacy industry like Edward Snowden, Matthew Green, and Bruce Schneier. This really gives the application a level of trust that goes beyond its competitors in the same field like Wickr, Telegram, WhatsApp, or Facebook Messenger.

Signal is very simple to use and provides a level of encryption that is top notch A+ grade and usable for all kinds of conversations. It is also open source, which allows everyone to view and validate that the application is working exactly as it is being marketed to work. This also provides transparency in assuring that the intentions of Open Whisper Systems don’t change or become malicious. The one thing that Signal provides that is above and beyond Wickr is support for very simplistic encrypted calling. This means you don’t have to just message someone, you can hold audio conversations with them completely encrypted and private from all levels of adversaries whether that be hackers, your mobile service provider, and even government bodies.

Use our "Encrypted and Secure Instant Messaging" on PrivacyTools.io for up to date information on Messengers.

There are a few major downsides to the way Signal operates however and it definitely isn’t for everyone. The biggest downfall of Signal is that it requires your phone number to operate. Even though they send only hashed phone numbers for contact discovery and uses encrypted bloom filters for calling contact discovery, this only prevents their server for seeing sensitive information like your name or number. But because it requires your phone number, you lose a serious level of anonymity over using something like Wire that does not explicitly need your number. Not everyone you have to speak with is going to be worthy of having your cell phone number; it is something that can compromise one’s identity and lead to things like fraud and identity theft. This is especially true for those who rely on being anonymous in many aspects of their life, like journalists, activists, or even whistleblowers (Edward Snowden). I find it odd that a person like Snowden, who would likely need a very high level of both security and anonymity in who he holds conversations with, uses a service that requires him to give up that anonymity with a cell phone that could be linked to his true identity. However, they have recently added support for self-destructing messages quite like how Wickr did it, which is awesome to see. Messages that go kaboom and don’t let the recipient view them after your allotted destructed time are wonderful.

Regardless, of these design flaws Signal is secure and that is what many people are looking for. It allows us to hold private conversations with another party in a fully encrypted fashion that keeps each party secure from anyone outside of said conversation. Signal isn’t anonymous by any means but for many, that isn’t an issue. I have started using Signal on a daily basis to talk with friends and it is starting to grow on me. You just can’t beat the simplicity.