After you have put all of the above pages to good use, you are going to be left with a lot of unneeded data. This data could include cache information, temporary files, browser history, chat conversations, and even records of your transactions. These are all things that can compromise your security if you leave them sitting dormant. Plus, they really don’t serve any great purpose other than to keep track of your history so getting rid of them is pretty beneficial.

To begin, you need to identify what information is being stored and where. A good way to do this is by going through your computer top to bottom and checking through typical folders that just pile junk. But unless you know the places to look and understand what can and cannot be delete, this process will just be too much of a headache. Thankfully there are programs out there designed to do some of this work for us. CCleaner is a popular one that is pretty widely used and available for both Windows and OSX. It removes temporary Internet files, browser history, application caches, recent files, and much more. It also comes with the ability to wipe over the free space on your HDD to prevent forensic recovery of data. This comes in handy if you store sensitive files on your system or need to remain HIPAA compliant or the like. A tool that I commonly you alongside CCleaner on windows based computers is PrivaZer, which works in the same manner but with more features and better functionality. I suppose if I had to only install one, PrivaZer would be my program of choice. 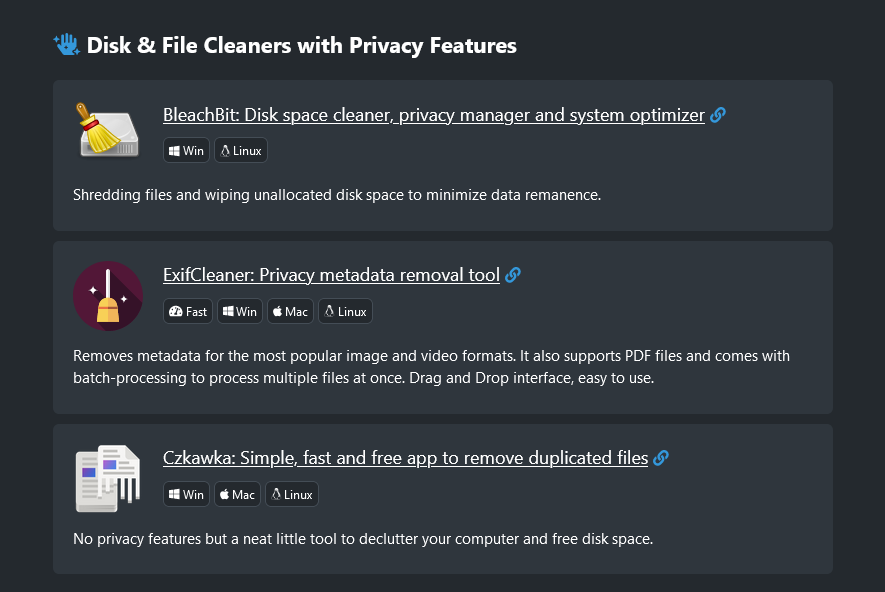 For those of you who fancy open source software, there is also BleachBit. Again, a program that works similarly but with different scan areas and items to delete. The shred levels are comparable between the three programs but I have found that using PrivaZer and BleachBit or CCleaner and BleachBit together gives me the widest scope for clearing out unneeded and unwanted files that could compromise my privacy and/or security. On OSX based computers, CCleaner is a good choice, but I have found that OSX stores a lot more “Hidden” information that you would expect. Some common folders to look in and delete files from are:

It is also important that the drives containing your previous data are destroyed securely when they are no longer needed. Even if you are just moving from one computer to another, I would recommend starting fresh and only transferring the files over that are a necessity. Especially on a Windows based computer, there are a lot of files that get stored in places uncommon for us to check. Even a simple thumbs.db file could be risky to our security if in the wrong hands.

There are typically two methods of making sure the data on these drives is not recoverable. Both methods take some time and aren’t a quick solve so making sure all your drives are full-disk encryption is of great importance. The first one would be to take it out back and beat it to pieces with a hammer, drill some holes through the disks, and burn it. If the data on the drive was already encrypted, you can be sure an adversary isn’t getting anything useful off it after you have shattered the disks to pieces. Do note though that Solid State Drives do not have disks in them and won’t shatter the same. The second method of destroying sensitive information from your hard drives or external media (like a USB stick or SD Card) is to use a program like DBAN (Darik’s Boot and Nuke), which is an open source software designed to be written to a disk or USB with the sole purpose of completely shredding all data from a device. It is often a good idea for Government Level Individuals to have a pre-made USB with the DBAN .iso written to it so you are ready to go when you need it. For maximum protection and to prevent any media being recovered, one could take their encrypted drive and wipe it with DBAN before reusing it. Or if you had no intentions of reusing it, you could then drill a hole or two into it and let your kid beat the sh## out of it with a hammer.